I thought this might be a native Indian area with petroglyphs along side the river, but ….. instead I find myself on an army base in the middle of the desert. This is an area where theyhave tested a lot of weapons since WW II.

I continued past the army base to the Imperial Dam area where I saw many donkeys or burros just wandering over the road. Also more turkey vultures sitting on the wire above the canal and finally, I saw a road runner cross the road in front of me, but not enough time to get the camera out. Wiley Coyote was not nearby either. 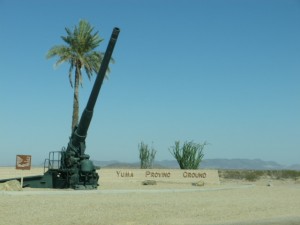